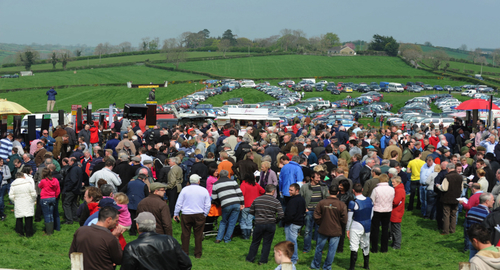 There is a Facebook competition to win 4 admission tickets and racecards; see Newry Hunt Facebook page. We are running a raffle at the races; Prizes are:

Formed in 1820, Newry Hunt is a large pack located in Northern Ireland. The pack hunts the area between Warren Point and Scarva. Their hunting season begins in October and runs to the middle of March.

The end of the hunting season for Newry Hunt coincides with the running of their annually point-to-point at Taylorstown.

The point-to-point has been run at the current location in Taylorstown for two decades and has been host to some horses that have gone on to besuccessful on the track. Namely,Truckers Tavern, a winner at Taylorstown in 2000 and Ballyholland, winner of the Galway Plate in 2011.

Newry is on the Main M1/A1 between Dublin and Belfast, Approx 12km before Newry look for the sign for Poyntzpass.

We provide free parking for all patrons attending the races. Accomdations can be made for disabled parking, please notify a parking attendee on arrival.

There is a betting ring located close to the parade ring, allowing racegoers to throw an eye over the runners before deciding on what horse warrants a wager. Off-course betting on Irish and UK race meetings is available.

Toilet facilities are situated around the track.

A day at Taylorstown point-to-point is a perfect family day out, bring a picnic and enjoy the fantastic racing on offer.

On the day our on site catering facility will be sell a range of fast food including chips, burgers and sausages.

If you are after something a little sweet, there will be a confectionary stall offering chocolate, sweets and crisps.

If the weather is good to us we are hoping that a Ice cream will be on site.

Our on-site catering provider will have a range of hot and cold drinks available for purchase.

There will also be a drinks tents on course for those looking for something a little stronger !

No, there is no dress code for our point-to-point. It is a perfect excuse to get the wellies out !

Yes, dogs arew elcome at our point-to-point just please ensure to keep them on a lead at all times.

Yes ! It is the perfect location for a picnic.

We are lucky enough to have side open spaces for kids to play in a safe enviroment.

No, we do not. The cloest ATM to the track is at Poyntzpass.

A day at Taylorstown point-to-point races is the ideal day out for all the family in the heart of the Irish countryside.

You have the opportunity to get a close up of the action when the runners are being saddled and paraded in the parade ring before their race. There is great excitement for racegoers as once you have picked out your favourite horse you can proceed to the bookies to have a little flutter.

Nothing beats the excitement of the closing stages of a race and our track ensures that you have a birdseye view. Our final fence and finishing straight are both fantastic viewing points for spectators.