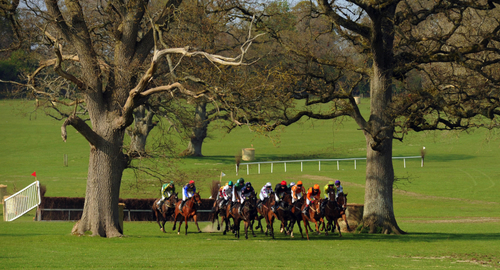 Laois Hunt Foxhounds hold ther bi-annualy Point-to-Point race meetings on the grounds of Stradbally Hall, the venue for the fixtures for over twenty years. Btoh meetings ran at Stradbally are held in the Spring, the first in mid-April and the second in mid-May. Ease of access and the unique setting make this a very popular event.

Stradbally Hall, as it appears today, dates from the middle of the 19th century. Stradbally Hall has been the seat of the Cosby family since the reign of Edward VI. We are very lucky to have such a picturesque setting where spectators have a view of the full course which runs over beautiful parkland.

One of the joys of point-to-point racing is the opportunity to get up close and personal with some of the future stars of Irish racing. Fundamentalist begun his racing career between the flags in the Irish countryside. The Cheltenham Festival winner recorded three wins in the pointing field, the second of which was achieved at Stradbally.